You are here: Home1 / sporting events 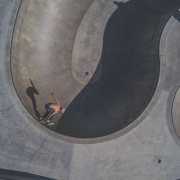 As technology makes way for easy to fly, quiet and safe drones to enter into mainstream use, drone pilots are venturing into new areas, such as action sports.

Can you imagine filming with a drone camera that follows you everywhere you go? Well, this innovative invention promises plenty of potential for shooting action sports athletes. When you shoot with a drone camera that follows a special subject by locking on a specified moving target, you are capable of capturing some of the most unique angles and shots that provide an immersive view of the sport.

By using sensors and software that enables the device to lock in on specific objects, you can create creative video and photo elements while capturing the true spirit of the athletes. Whether you are covering a snowboarding event or filming a surfing competition, hi-tech maneuverability options and inventive features give you a detailed but stable view of the athlete.

What Drones Can Do?

From capturing marathon steps to shooting BMX cycle races, drones produce stunning visuals that make the viewer feel as if he’s participating in the event with other athletes. You don’t just create a different way to present your footage. You craft a unique experience that lets everyone enjoy the thrill and excitement of action sports.

Drones defy physical limitations and that’s exactly what action sports athletes love to do. For that reason, drones can film pretty much everything. Open waters, mountain tracks, cliffs, roaring ocean waves, drones are ideal for shooting athletes engaged in action sports flawlessly. Since drones mimic the way we move and are also able to follow, they don’t just convey visuals but feelings. Naturally, the revolutionary technology is all set to transform the way we cover and watch sports.

Feel the bicycle riders pulling and surfers paddling into a wave to get the actual feeling of the height, speed, distance, and the strength of the athletes.

Traditional cameras either need to be locked in to one position or be mounted to a complicated series of wires, booms, or other movable equipment such as cars and tracks. With drones you can not only fly to where the action is, but also move above and around obstacles such as trees, overpasses, and always capture the best angle possible giving the viewer a unique perspective of everything at once. Combing this with traditional ground equipment creates a cinematic effect that previously would take entire crews and tens of thousands, even hundreds of thousands of dollars to achieve.

The future of filming

No other professional camera can communicate the spontaneity of action sport. While drones excel at this stuff, some of them most hi-tech models capture every distinct movement.

Drones provide a bird’s eye view of a football field, a surfing venue or a marathon event. Event organizers and sports companies can benefit from the technology to create stunning aerial visuals or take shots close to ground, without disturbing athletes or affecting their performance.

Drones allow us to create natural things and defy gravity to capture footage from unique angles. Since these hi-tech devices are widely available in all specs, you can easily find the best drone for covering all action sports. Drone cameras are convenient and portable videography devices which transform conventional ways of covering events. This technology can also help us study particular behaviors of successful athletes to figure out their personal style.
June 11, 2019/0 Comments/by LA Drone Footage
https://ladronefootage.com/wp-content/uploads/2019/01/los-angeles-action-sport-photography.jpg 778 1000 LA Drone Footage http://ladronefootage.com/wp-content/uploads/2019/01/LA-Drone-Footage-White.png LA Drone Footage2019-06-11 18:05:412019-06-19 02:48:11How Drones are changing Action Sports Filming

From audience members viewing from home to viewers in the stadium, fans wishing to have a closer, yet defined, close-up of their favorite player is very important for sporting events. Even though ground photography is getting better year after year, it still has a long way to go in order to cover every angle and provide distinct views. Fortunately, this need is catered by drone videography. So here are some substantial reasons why you should hire a drone photographer in your upcoming sports event.

Even minor changes in the teams’ movement can radically change a losing game to a winning one. Moreover, since these games are not only played for recreational purposes now – they involve whole economies with billions of dollars at stake – teams are taking every worthy measure to make themselves superior. Hence, aerial videography is used to capture training sessions of each sports team. They are quite helpful in recording all the movements that cannot possibly be recorded with the naked human eye. This technology helps coaches and the whole team to critically analyze their movements and brace themselves for an upcoming game.

Unlike conventional methods of recording videos, drone videography tends to record everything from a safe distance without causing any intrusion in the game. This is ideal for any sports event – racing, football, basketball, etc. – as no matter what the nature of the match might be, with the assistance of a portable device hovering over the players, the whole event can be spontaneously recorded without missing out a single movement. This specific characteristic of drone videography tends to be quite convenient for everyone involved in the game – players, audience, and viewers (from home) etc.

It is no surprise that strategically planned sports campaigns are launched before and after the start of big matches. They not only promote sports goods and services among fans, but are all about nurturing a level of excitement in people that stay within them long after the games have ended. Therefore, drone videography is being utilized to raise the bar of sports videography. Drones are providing aerial coverage that is necessary to build a new perspective among the audience and provide them with a memorable experience that will not only encourage them to buy the sports merchandise, but also ensure that they keep coming for more updates.

Apart from the most captivating shots to capturing the moments candidly, drones are also used for the true purpose they were created – surveillance. Security measures are a major area of concern even for the most mundane place nowadays – schools, shopping centers, etc. – let alone hosting an event where thousands of people will be given an accommodation to watch the sports match, is of the highest security concern.

Drones can give a diverse security perspective from flyover shots of the whole vicinity to reveling they are revolutionizing security measures.